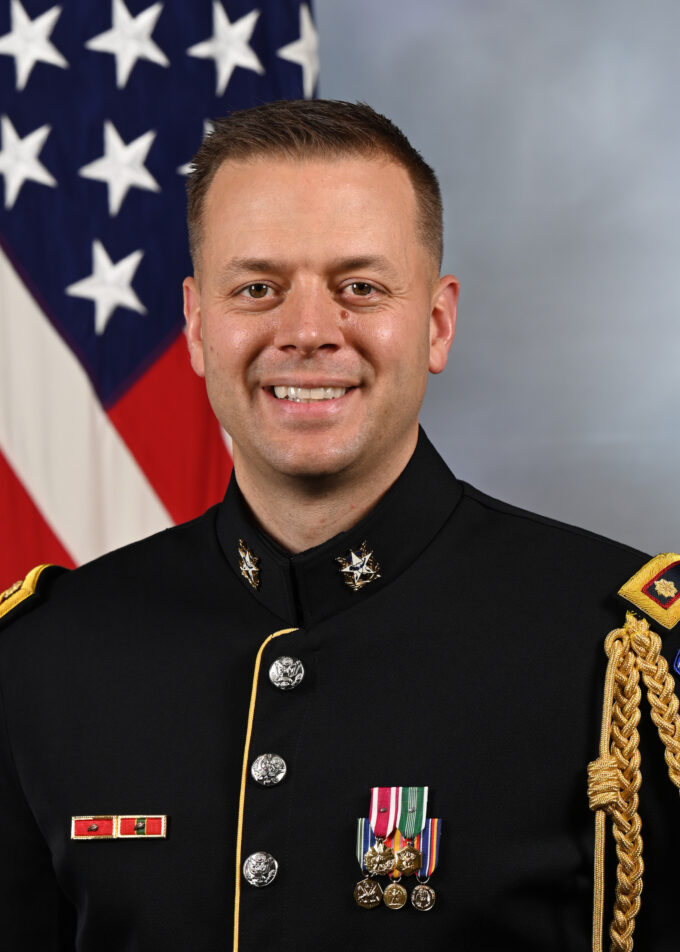 Major Aaron Morris serves as the Executive Officer of the U. S. Army Band, as the Associate Conductor and Officer in Charge of the Army Ceremonial Band, the Army Herald Trumpets, and he is the Officer in Charge of the Army Band Support Element. A native of Finksburg, Maryland, he holds a Bachelor of Music Performance from the University of Maryland, a Masters of Music Education from Old Dominion University, and a Masters of Operational Studies from the Command and General Staff College. His previous teachers and mentors include Dale Underwood, Dennis Zeisler, and Dr. Nancy Klein.

Major Morris began his military career in 2005 as a saxophonist with the 257th Army National Guard Band in Washington, D.C. In 2007, he joined the Training and Doctrine Command Band at Ft. Monroe, Virginia. While at the TRADOC Band, he was the first awardee of the Army Bands Soldier of the Year Award.

Major Morris received his commission in 2009 from the Officer Candidate School at Ft. Benning, Georgia where he was a Distinguished Military Graduate. He was then assigned to the Army School of Music in Little Creek, Virginia where he served as Executive Officer. He later served in the Army Forces Command, G-1 as the Staff Bands Officer, at the Forces Command Headquarters at Fort Bragg, North Carolina. In this position, he was responsible for the evaluation and support of all aspects pertaining to the 76 FORSCOM Army Music Units. Major Morris then served as the Executive Officer of the United States Army Europe (USAREUR) Band and Chorus. During his tenure with the USAREUR Band and Chorus, the unit performed in over 25 countries for over 250 million people. Some highlights of his time with the USAREUR Band and Chorus include organizing and leading the NATO Saxophone Ensemble at the 2015 World Saxophone Congress, performing at the 2016 Royal Edinburgh Military Tattoo, and leading the Soldiers’ Chorus in performances in Kyiv, Ukraine. Most recently, Major Morris was in command of the Maneuver Center of Excellence Band at Ft. Benning, GA.

Major Morris and his wife, Meredith, have two lovely children, Brynn and Holden.