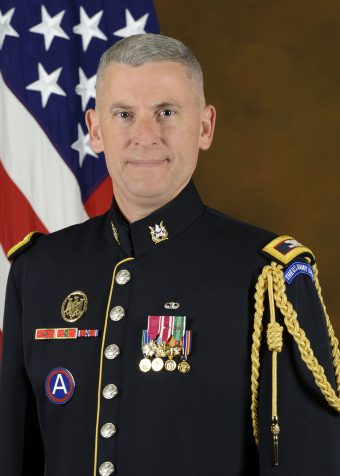 Colonel Andrew Esch is a native of Fairfax, VA, and holds a Bachelor of Music degree from Michigan State University and a Master of Arts degree in conducting from George Mason University. He began his Army career as a Quartermaster Officer serving first as a Platoon Leader and HHC Executive Officer in the 11th Transportation Battalion, Fort Story, VA, and then as a Staff Officer in the Casualty and Mortuary Affairs Operations Center during Operation Desert Storm. Following Desert Storm, he left the Army to join The U.S. Air Force Band in Washington, D.C. as a French horn player. After three years as an instrumentalist Col. Esch returned to the U.S. Army as a commissioned band officer. Since then, Col. Esch has served the Army across a broad spectrum of assignments most recently as 24th Commander of the US Military Academy Band at West Point, New York, the Army’s primary public engagement organization for New York City and the Northeast region. At West Point he and the band represented the Army with regular performances for FOX, NBC’s TODAY show and with internationally renowned groups such as the Mormon Tabernacle Choir. Col. Esch’s other assignments include: Commandant, U.S. Army School of Music, Virginia Beach, Virginia; Deputy Commander, The U.S. Army Band “Pershing’s Own;” Commander of the US Army Europe Band & Chorus in Heidelberg Germany; Commander of U.S Continental Army Band, Fort Monroe, Virginia; Executive Officer & Ceremonial Officer of The U.S. Army Band “Pershing’s Own;” and Commander, Student Company, U.S. Army School of Music. Col. Esch and his wife have three children.