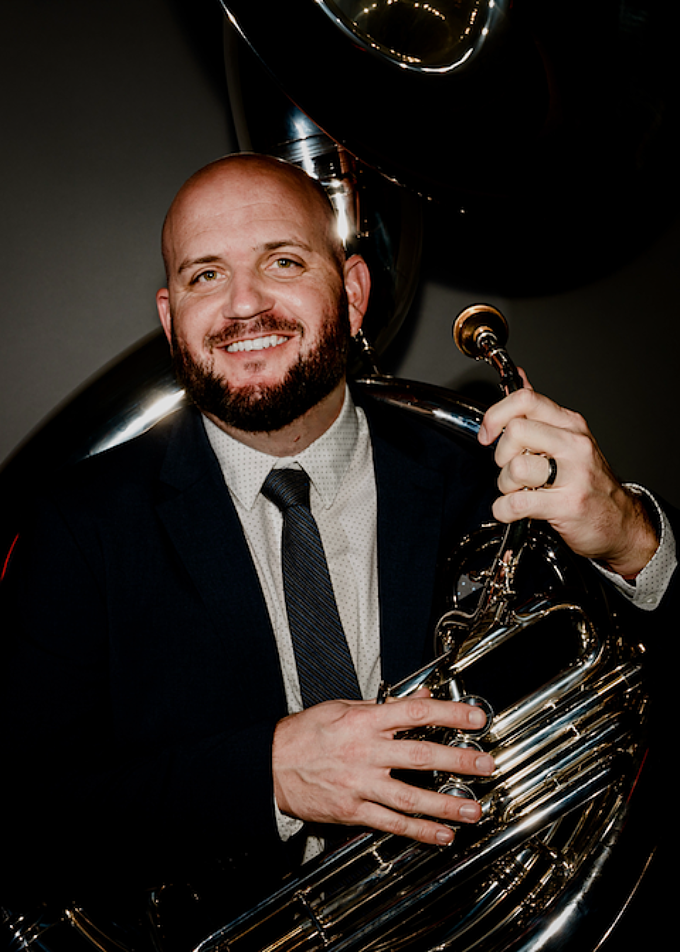 Bill Muter is a multi-instrumentalist, best-selling author, composer, clinician and probably most well known for his work on the tuba. Having performed in venues across the globe, Bill is without a doubt one of the world’s leading tuba and and bass players earning him the nickname “Tuba Visionary.” The New Times also hails Bill as a“Showstopper” and “The most innovative tuba player we’ve seen.”

As a performer, Bill was a tuba soloist, percussionist and keyboardist in the Tony and Emmy Award winning Broadway sensation “Blast!” During Bill’s tenure, the show performed in numerous tours throughout North America and Japan as well as residencies at the World Expo in South Korea and Six Flags Fiesta Texas. Bill was also the trombonist and horn section MD for the popular Haitian Kompa band “Gabel” with tours throughout Haiti, Canada, Dominican Republic and the French Antilles. Bill has shared the stage with 6 time Grammy Winner Shaun Martin of “Snarky Puppy”, the Snarky Puppy horn and rhythm sections with Shaun Martin’s Go-Go party, Sarah Reich of “Postmodern Jukebox”, Stefon Harris, Warren Wolf, James Francies, Matthew Whitaker, MonoNeon and more. Bill is a bandleader and fronts a 10 piece funk band “Topless in Tokyo.” Bill and his groups have opened for Lenny Kravitz, The Black Pumas, Boyz II Men, Norah Jones, Bobby McFerrin, Lalah Hathaway, The Roots and more.

Bill’s love for the stage is only echoed by his passion for music education in the classroom. Bill holds the esteemed title of “Cultural Ambassador” with the U.S. Department of State’s Bureau of Educational and Cultural Affairs and has worked with embassy’s and music organizations across the globe. His instrumental technique book “A Practical Approach” was a best-seller on Apple’s iBookstore with it’s largest audience primarily in Japan. Bill was also an Artist in Residence and Curriculum Advisor at Honeyland College in Lagos Nigeria, blending the roots of Afrobeat music and jazz. Bill is also an Adams Brass endorsed Artist and Clinician.

Bill is heavily involved with the marching arts activity as clinician, designer and adjudicator. Bill has worked with the Boston Crusaders, Crossmen and Colts Drum and Bugle Corps and was also the Caption Head for the WGI Gold Medalist “Stryke Wynds.” Bill’s compositions have achieved numerous state championships.

As a composer for band and film. Bill has written, recorded or composed for works featured on BET, Okayplayer, XXL Magazine, Tribeca Film Festival and more. His recent scoring work for “Aurinko in Adagio” by Elisee Jr St Preux will be his fist Academy Award qualifying film and was nominated for an NAACP Image Award. His solo albums have reached #1 on the iTunes Charts in South Africa and in the Top 30 Global R&B charts.