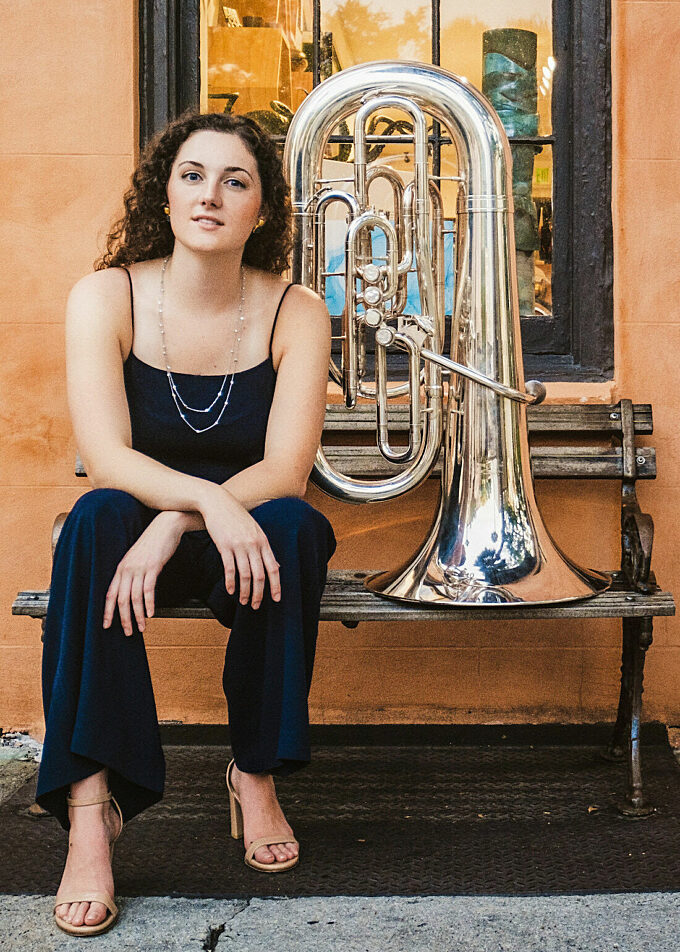 Bridget Conley is an American tuba player living in New Haven, Connecticut. Bridget was the winner of the 2021 Leonard Falcone International Euphonium and Tuba Solo Artist Competition. She was also the winner of the 2020 Vanderbilt Wind Symphony Concerto Competition with her performance of Dana Wilson’s “Concerto for Tuba,” the winner of the 2017 South Carolina Phi Beta Mu Solo Competition, and a semi-finalist in both the Mock Orchestral Audition and Small Ensemble Competition of the 2019 International Tuba and Euphonium Conference. Bridget is a substitute musician for the New World Symphony. She has performed with ensembles such as the Stichting Zaterdagmiddagmuziek Domkerk, the Yale Philharmonia, the Brevard Music Center Orchestra, the Conservatory of Amsterdam Philharmonic, the Vanderbilt Orchestra, and the National Honor Band of America. Bridget has spent summers at the Brevard Music Center and the Kennedy Center as a fellow of the 2018 National Symphony Orchestra Summer Music Institute. In addition to her experience as a performer, Bridget is also a passionate educator. She holds a minor in Pedagogy from Vanderbilt University, where she studied psychology, music cognition, and conducted independent research on brass pedagogy with Jeremy Wilson, Associate Professor of Trombone at Vanderbilt University. Bridget holds a Bachelor of Music degree in Tuba Performance with a minor in Brass Pedagogy from Vanderbilt University’s Blair School of Music in Nashville, TN. At Vanderbilt, she studied with Professor Gil Long, principal tubist of the Nashville Symphony Orchestra. In the fall of 2019, she spent a semester studying at the Conservatory of Amsterdam with Perry Hoogendijk, principal tubist of the Royal Concertgebouw Orchestra. She is currently pursuing her Master of Music Degree in Performance from the Yale School of music, where she studies with Carol Jantsch of the Philadelphia Orchestra. Bridget is a native of Charleston, South Carolina. When not playing tuba, she loves cooking, reading, and spending time with friends and family.