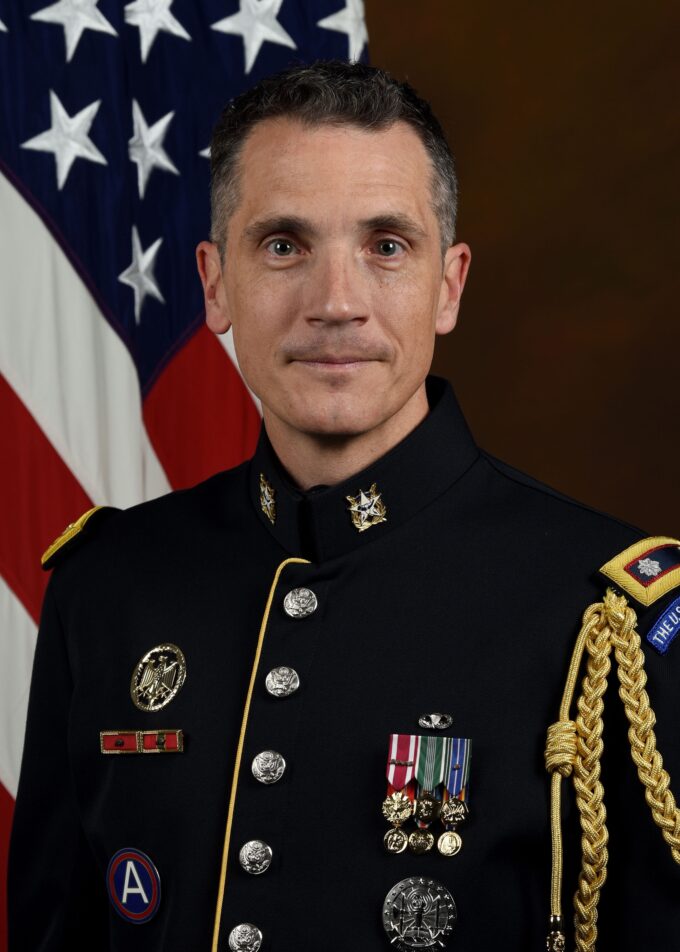 Lieutenant Colonel Daniel Toven serves the U.S. Army’s premier music organization as Deputy Commander, Associate Bandmaster, and Director of The U.S. Army Chorus. A native of Union City, PA, he holds a Bachelor of Science in Music Education and a Bachelor of Fine Arts in Trombone Performance from Indiana University of Pennsylvania, a Master of Music in Conducting from the Eastman School of Music, and a Master of Military Art and Science from the Command and General Staff College. Prior to this assignment, LTC Toven served as the Deputy Commandant at the U.S. Army School of Music in Virginia Beach, VA. While assigned to the School of Music, he deployed to Kuwait, where he served as the Theater Music Liaison Officer for U.S. Army Central. In that role, he coordinated Army music support throughout the Middle East and leveraged those capabilities to support the U.S.’s strategic public diplomacy initiatives in the region. Other previous assignments include: Commander of The Army Ground Forces Band (Fort Bragg, NC), Army Forces Command Staff Bands Officer, Director of the U.S. Army Europe Soldiers’ Chorus (Heidelberg, Germany), and Director of the U.S. Army Soldiers’ Chorus (Fort Meade, MD). Before joining the Army he held a variety of professional music positions throughout the northeastern United States including founder, music director, and conductor of the Plum Creek Chamber Orchestra, and assistant conductor of The Mendelssohn Choir of Pittsburgh, where he worked with Grammy Award-winning mentor, the late Robert Page. He has also prepared choruses for the Boston Pops Holiday Pops under the direction of Keith Lockhart, and for performances with the Pittsburgh Symphony Pops Orchestra under the direction of Marvin Hamlisch. In addition to teaching high school in the Pittsburgh, PA and Washington D.C. areas, LTC Toven spent the fall of 2001 as Director of Choruses for Colgate University. He continues to be in demand as a clinician and guest conductor and has conducted numerous County, District, Region, and All-State band and chorus festivals in Pennsylvania, Virginia and North Carolina. LTC Toven has continued his professional development by attending the prestigious Pierre Monteux School for Orchestra Conductors as well as numerous choral and orchestral conducting workshops. As a trombonist, he has recorded with the Keystone Winds and performed with the Johnstown Symphony Orchestra and the St. Vincent Camerata Brass. As a vocalist, he has sung with numerous professional ensembles in the Pittsburgh, PA and Washington, D.C. areas including the Washington National Cathedral Choir of Men and Boys, and can be heard on the Cantaloupe Music recording of Steve Reich’s The Desert Music. LTC Toven is a graduate of the Command and General Staff College, the Army Band Captains Career Course, the Adjutant General’s Basic Officer Course (President Benjamin Harrison Award), Officer Candidate School (Distinguished Military Graduate), and has earned the Basic Parachutist’s Badge. His military awards include the Meritorious Service Medal, the Army Commendation Medal, the Army Achievement Medal, the National Defense Service Medal, the Global War on Terrorism Expeditionary Medal, and the Global War on Terrorism Service Medal. His husband (also an Army Officer) is an emergency nurse practitioner and has served as commander of the Headquarters and Headquarters Detachment, 18th Field Hospital, U.S. Army Reserve.