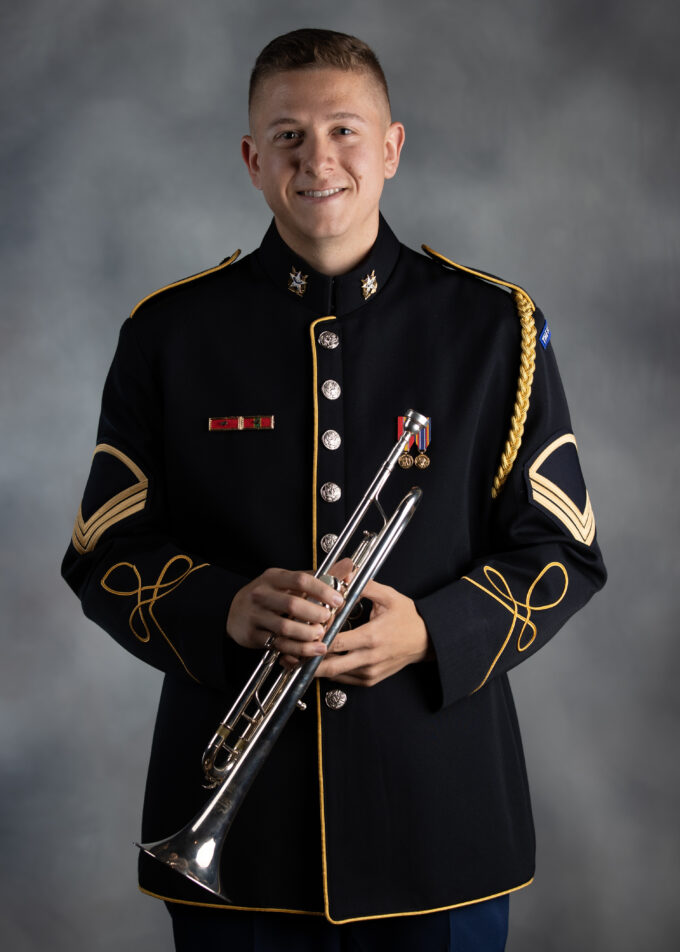 SSG David Puchkoff began his studies at the age of ten when he discovered his brother's old trumpet in the attic of his home. After playing the instrument, he immediately knew it was a perfect fit. Puchkoff attributes his passion for trumpet to a Canadian Brass CD gifted to him as a young teenager. From then on, he knew he had to pursue music professionally. Growing up in Poughkeepsie, NY, he was privileged to study with SFC Retired Stephen Luck a trumpeter from the West Point Academy Band. Puchkoff went on to pursue his bachelor's degree at the Eastman School of Music, where he performed and recorded several times with the Eastman Wind Ensemble. While attending Eastman, Puchkoff performed with the Rochester Philharmonic Orchestra and the New World Symphony. He developed a passion for performing on baroque trumpet, studying with Brian Shaw, and continues to pursue early music opportunities outside the Army Band. As a culmination of his undergraduate career, Puchkoff was featured as a soloist with the Eastman Philharmonia, performing Jolivet's "Concertino" for trumpet, piano, and strings. His primary teachers include James Thompson, David Krauss, Ray Mase, and Kevin CobbPuchkoff earned fellowships to perform in Colorado with the National Repertory Orchestra and The Aspen Music Festival Orchestra. He believes the mountains not only inspired his trumpet playing but also led him to discover new hobbies such as mountain biking and brewing craft beer. Additionally, he enjoys cooking foods of all nationalities and hopes to travel the world one day. Puchkoff joined "Pershing's Own" in December of 2019 and currently performs as a substitute with the Richmond Symphony.