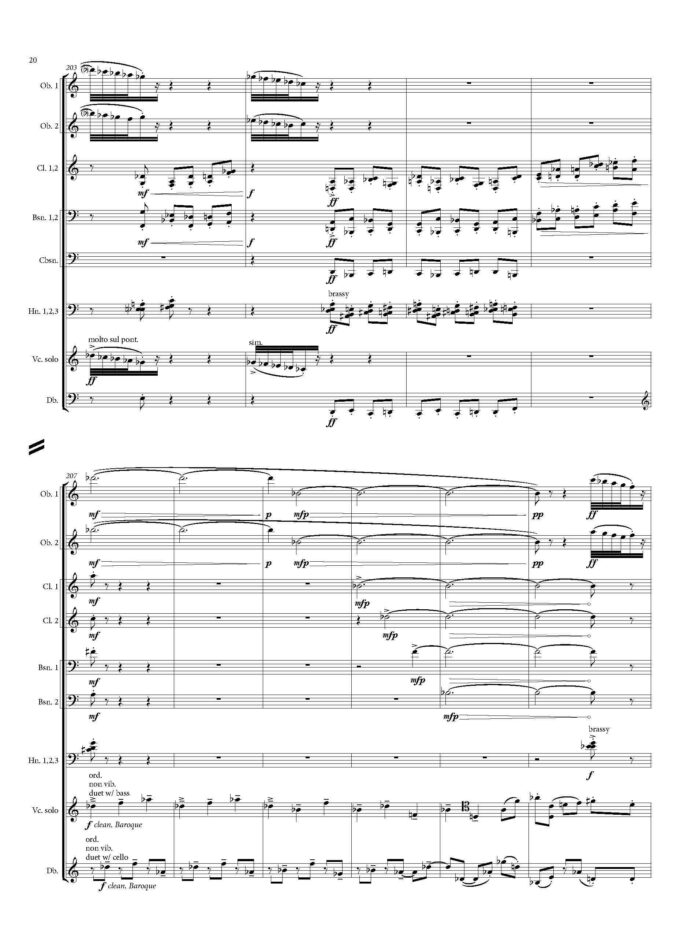 Dynamics is a concerto for cello and chamber winds, written for cellist Michael Kaufman and commissioned by the wind ensembles of the Eastman School of Music (Mark Scatterday, Director) and University of Georgia Hugh Hodgson School of Music (Cynthia Turner, Director). Each movement sees the cello and ensemble interact in ways inspired by the different sorts of relationship dynamics we have likely all encountered in our daily lives.

The explosive first movement, “Swipe,” has the cello “controlling” the wind ensemble, sometimes turning it on and off, sometimes leading it like a marionette. The cello eventually winds up the ensemble so much that it frees itself from the cello and takes on a life of its own. In “Nimbus,” the ethereal second movement, the woodwind instruments form a luminous halo around a fragile, mysterious cello melody that seems to float above all. Most of the woodwind players are asked to play “flutes” made of PVC pipe in this movement, creating an otherworldly soundscape that is in stark contrast to the outer movements. The playful final movement, “Red Flags,” begins in fits and starts, flickering back and forth between explosive, almost cartoonish gestures and more relaxed, Romantic ones. As the movement progresses, these two different musical atmospheres increasingly and uneasily blend with each other, pushing toward a frenetic conclusion.