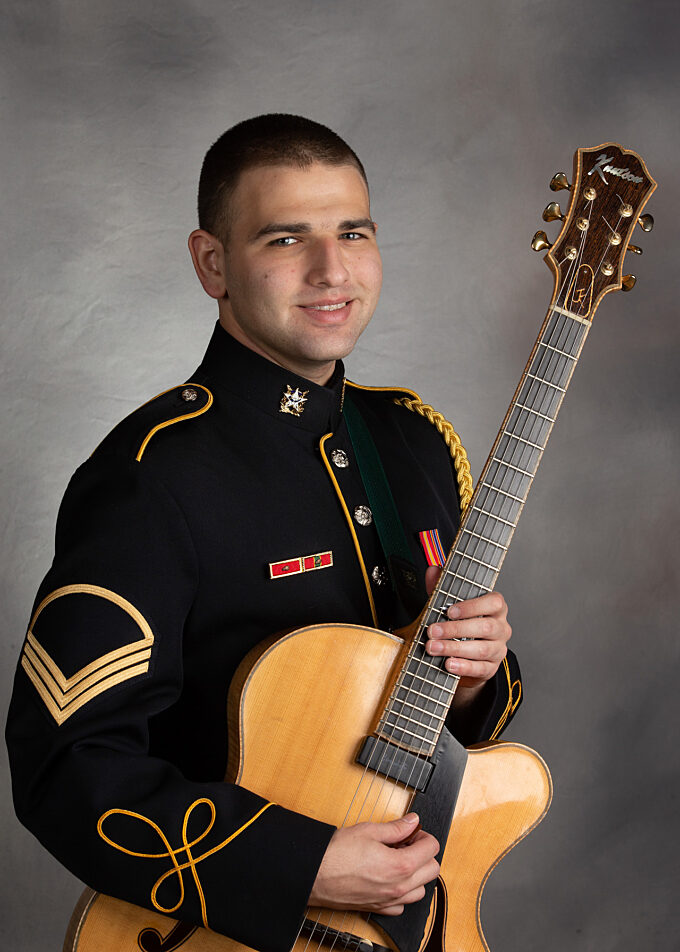 SSG Jan Knutson, guitarist, has been a member of The U.S. Army Band “Pershing’s Own” since August 2018. Prior to joining “Pershing’s Own” at the age of 19, he attended the Manhattan School of Music as a student of Rodney Jones. He also studied with Steve Abshire, Frank Vignola, Martin Taylor, Peter Bernstein and Paul Wingo. At the age of 15, he recorded his solo CD album, “Out of Nowhere.” At the age of 16 he was selected as a Strathmore Artist in Residence and presented several concerts throughout the year and recorded his second album, “Looking Both Ways,” featuring guitarist Steve Abshire, bassist Tommy Cecil, and mandolinist Danny Knicely. Knutson has been a featured artist at several jazz festivals including Richmond Folk Festival, True Blue Jazz Festival, Syracuse JazzFest, and Savannah Folk Festival. Knutson has also performed at premier venues such as the Kennedy Center Millennium Stage, The Iridium, and the Capitol Theatre in Salt Lake City. He has performed with some of the world’s greatest guitarists including Julian Lage, Bucky Pizzarelli, Frank Vignola, Gene Bertoncini, and Martin Taylor. Knutson is a native of Berwyn Heights, MD, and graduated from the Science and Technology Program at Eleanor Roosevelt High School.