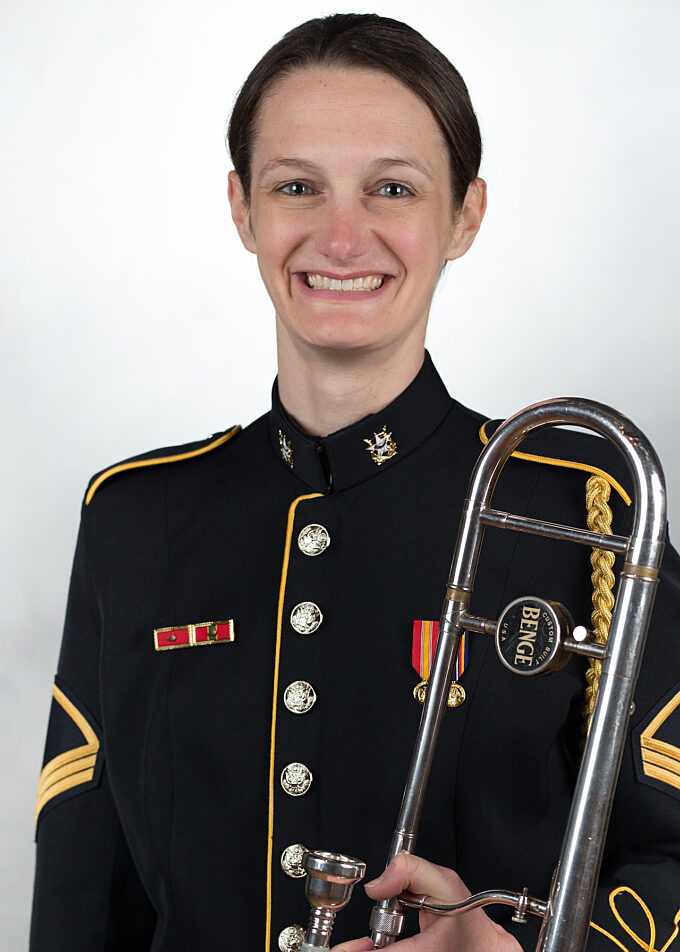 Master's Degree: U of Cincinnati, College-Conservatory of Music

Doctorate or Performance Certificate: U of Cincinnati, College-Conservatory of Music

SSG Katie Thigpen, native of Mount Pleasant, SC, began playing trombone at age 10 and graduated from Wando High School. She holds a Bachelor’s degree in music education from the University of South Carolina and completed her Master's and Doctoral degrees at the University of Cincinnati College-Conservatory of Music in performance. Prior to joining “Pershing’s Own”, Thigpen was working as an educator and freelancer in the Washington, D.C., area, teaching privately in several schools and local music organizations. An advocate of music education, she continues to maintain a private studio and has spent ten summers on staff and faculty at Blue Lake Fine Arts Camp in Twin Lake, MI. Active as a performer, Thigpen has played with the National Philharmonic, Roanoke Symphony Orchestra, Lancaster Symphony Orchestra, Cincinnati Symphony Orchestra, Dayton Philharmonic Orchestra, West Virginia Symphony, and York Symphony Orchestra. As a fellowship recipient she spent two summers at the Aspen Music Festival and School and in 2013 she won the Eastern Trombone Workshop National Solo Competition. Her primary teachers include Brad Edwards, Tim Anderson, Per Brevig, and Craig Mulcahy. Aside from music Thigpen enjoys baking, spending time outdoors, and cheering for the Carolina Gamecocks.