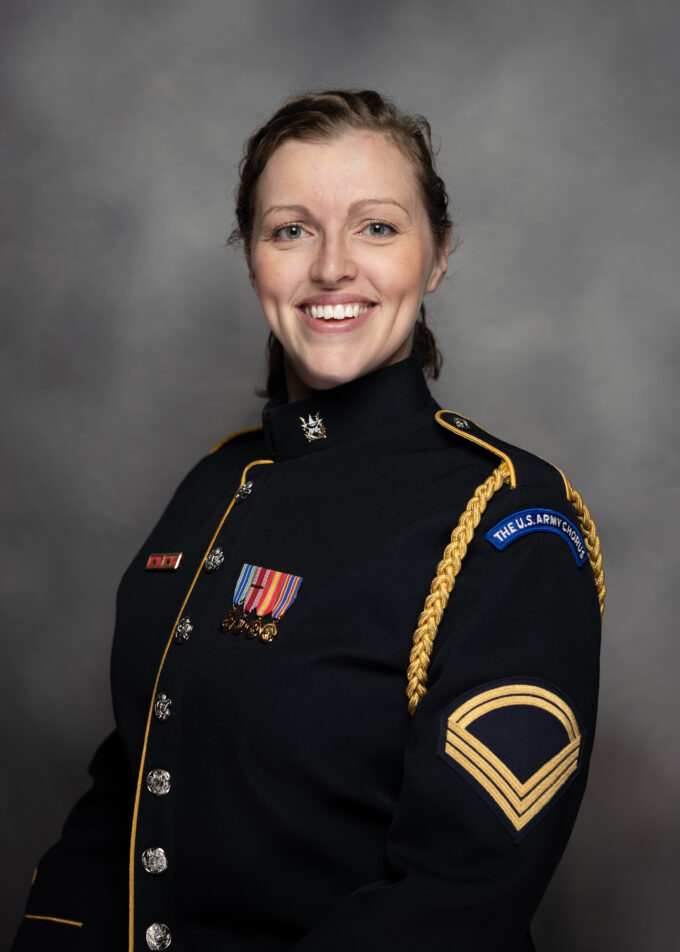 Master's Degree: College-Conservatory of Music, U of Cincinnati

Originally from Mount Hope, New York, SFC Lindsey Grebeldinger joined the ranks of The U.S. Army Voices in late 2014. While working towards her bachelor’s degree in music at the University of Hartford’s Hartt School of Music, she began to explore her classical vocal palette through a diverse set of roles from operas such as Tchaikovsky’s Eugene Onegin (‘Olga’) and Humperdinck’s Hansel and Gretel (‘Witch’), to Ravel’s L’enfant et Les Sortilèges (‘Maman’ and ‘The China Cup’). She continued her studies at the College-Conservatory of Music, University of Cincinnati, where she earned a master’s degree in music in 2014. Her most notable role while at Cincinnati was her portrayal of ‘Mrs. Jones’ in Kurt Weill’s American opera Street Scene with the CCM Opera. The Cincinnati Enquirer described her interpretation as “especially charismatic.” During that time, she also worked with the Cincinnati Opera and in 2013 appeared in their cabaret concert series of crossover repertoire which included scenes from a variety of vocal works, including Mozart’s opera, Idomeneo, and songs from musicals such as Hairspray, Phantom of the Opera, and Songs for a New World. In 2012, while studying under the tutelage of Nico and Carol Castel at the select Delaware Valley Opera Professional Artist Development Program, she performed the roles of ‘Emelia’ in Verdi’s Otello, ‘Lois Lane’ in Cole Porter’s Kiss Me, Kate, and ‘Meg Page’ in Nicolai’s The Merry Wives of Windsor. Capable of performing in an array of classical and contemporary styles, Grebeldinger was given the rare opportunity of singing back-up vocals for international pop star, Josh Groban, during his world tour in 2013. Her notable teachers have included Thomas Baresel, Joanna Levy, and Eileen Mackintosh.