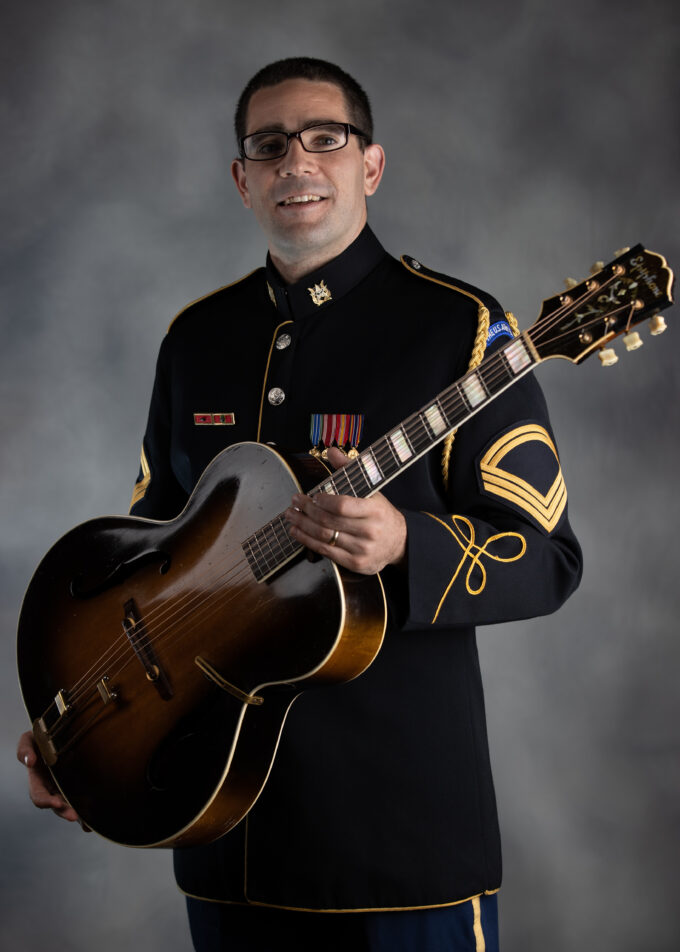 Born in Washington, D.C., and raised in nearby Germantown, MD, guitarist, SFC Michael Kramer, can truly be called a “local boy.” At age sixteen, he landed his first steady ‘gig’ playing guitar at Café Mileto, a neighborhood restaurant where he had previously bussed tables. For two years, he played solo guitar there every Friday and Saturday night, honing his skills for his music future. Following high school, Kramer headed off to the University of Maryland in College Park, MD, where he earned a bachelor's degree, magna cum laude, in Jazz Studies in 2011. While there, he studied under guitarist, Gerry Kunkel. Throughout college and following graduation, Kramer was an active freelance musician in the Washington, D.C., jazz scene playing in venues such as An Die Musik in Baltimore and DC’s Atlas Theater. As a sideman, he had the good fortune of performing with jazz greats such as Ted Brown, Lee Konitz, and Joe Chambers. In 2012, Kramer enlisted as a musician in the United States Navy and was assigned to the Navy’s musical organization of the Pacific Northwest, Navy Band Northwest at Naval Base Kitsap-Bangor, in Silverdale, WA. During his fourteen months with that unit, he was a regularly featured soloist and upon his departure was recognized as the band's Staff Arranger. While there, Kramer auditioned for The U.S. Army Band “Pershing’s Own.” He feels fortunate to have won the position and transfer services to the seat he currently holds today in The U.S Army Blues. With "The Blues" he has performed with jazz greats such as trombonist Wycliff Gordon. When not performing with "The Blues," Kramer remains an active musician on the D.C. jazz scene and is an educator at Shenandoah Conservatory in Winchester, VA, where he holds a position on the adjunct Applied Music faculty in jazz guitar.