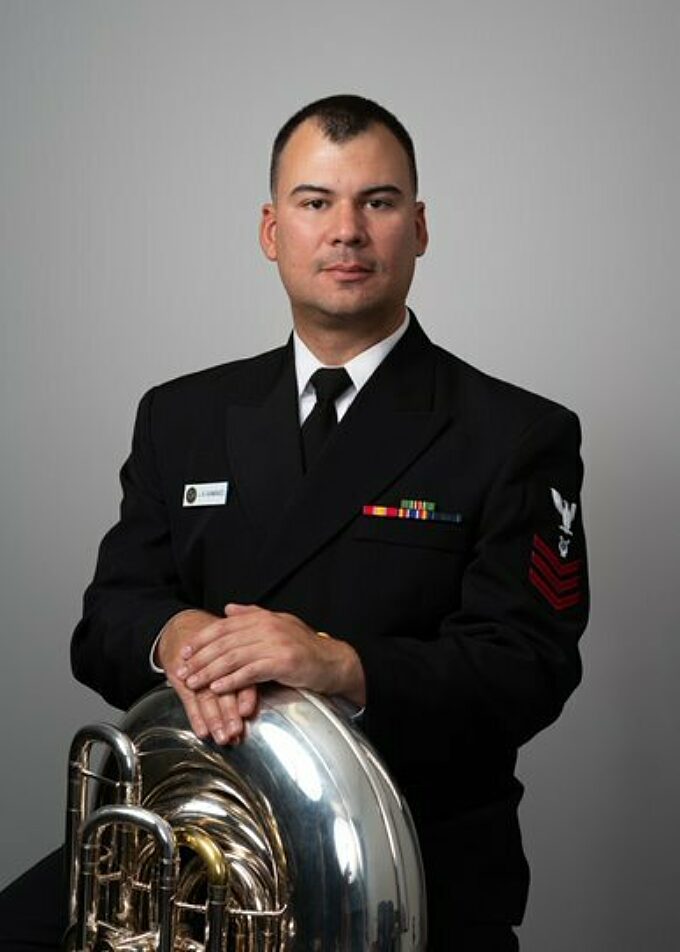 Musician 1st Class Joseph Guimaraes, from Boca Raton, Florida, joined the Navy Band in 2020 as a tuba instrumentalist. He received a Bachelor of Music from the Lynn University Conservatory of Music, a Master of Music from the Yale School of Music, and is currently pursuing a Doctor of Musical Arts from the University of Georgia. Guimaraes’ primary teachers include David Zerkel, Carol Jantsch, Kenneth Amis, Jay Bertolet and Sean Murray. While in Georgia, he was the principal tuba for the Bulldog Brass Society Quintet under the coaching of Phil Smith. In 2019, Guimaraes earned the silver medal in the artist division solo competition at the Leonard Falcone International Euphonium & Tuba Festival. He also received first-place prize at the 2017 Northeast Regional Tuba/Euphonium Conference (NERTEC) Solo Artist Competition held in Ithaca, New York. The same year, Guimaraes was one of 30 recipients of the coveted Paul and Daisy Soros Fellowship for New Americans, receiving national recognition for his philanthropic efforts related to his founding of The Mouthpieces for All Initiative, a program that promotes and encourages music education for youth while focusing on training that can inform life choices outside of the arts. Guimaraes has held principal tubist positions for festivals such as the Pacific Music Festival in Sapporo, Japan, and the Chautauqua Music Festival in Chautauqua, New York. He has been a featured soloist with the Blue Lake Festival Band, the Lynn University Wind Ensemble, the Florida Atlantic University Symphony Orchestra and Florida

Atlantic University’s Wind Ensemble. Outside of music, some of his additional interests include hiking and exploring different restaurants around the area.