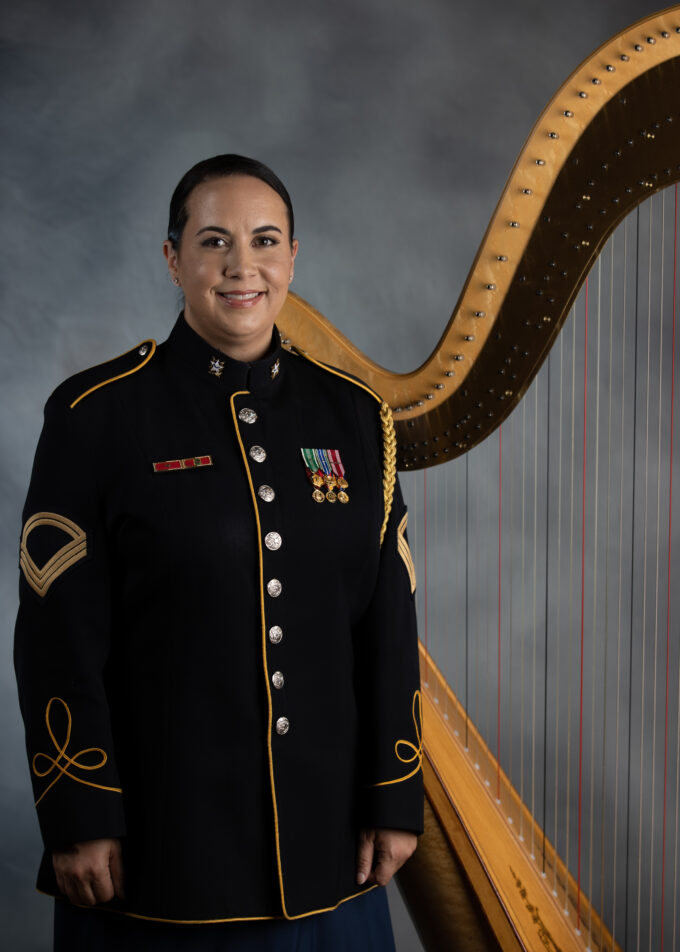 Harpist SFC Nadia Pessoa joined The U.S. Army Band “Pershing’s Own” in 2006. Originally from Miami, Florida, she began playing the harp at age two and a half, and attended Indiana University, where she earned a Bachelor of Music and a Performer Diploma, studying with Susann McDonald. She spent additional time studying in Vienna, Austria, and went on to earn a Master of Music in Performance at the University of Michigan, where she studied with Dr. Lynne Aspnes.Prior to joining The U.S. Army Band “Pershing’s Own,” Pessoa served as acting principal harpist with the Louisiana Philharmonic Orchestra in 2006, and taught at Louisiana State University. She is the recipient of awards from the National Society of Arts and Letters, the American Harp Society, National Federation of Music Clubs, Downbeat Magazine, and the Fort Collins Symphony. She has participated in numerous national and international festivals, including the National Orchestral Institute, Henry Mancini Institute, Domaine Forget, and the Music Academy of the West in Santa Barbara. Pessoa performed at the 2002 World Harp Congress in Geneva, and on the 2005 Grammy award-winning recording of William Bolcom's Songs of Innocence and Experience, under the direction of Leonard Slatkin. Locally, she has performed with the Annapolis Symphony, the National Philharmonic, the Choral Arts Society, Arena Stage, The Washington Ballet, and the Kennedy Center Opera House Orchestra.Pessoa regularly performs with The U.S. Army Orchestra and The U.S. Army Concert Band, as well as for diplomatic and military events. She has appeared as a soloist with the Concert Band on five occasions, including at the National Mall and Lincoln Center.