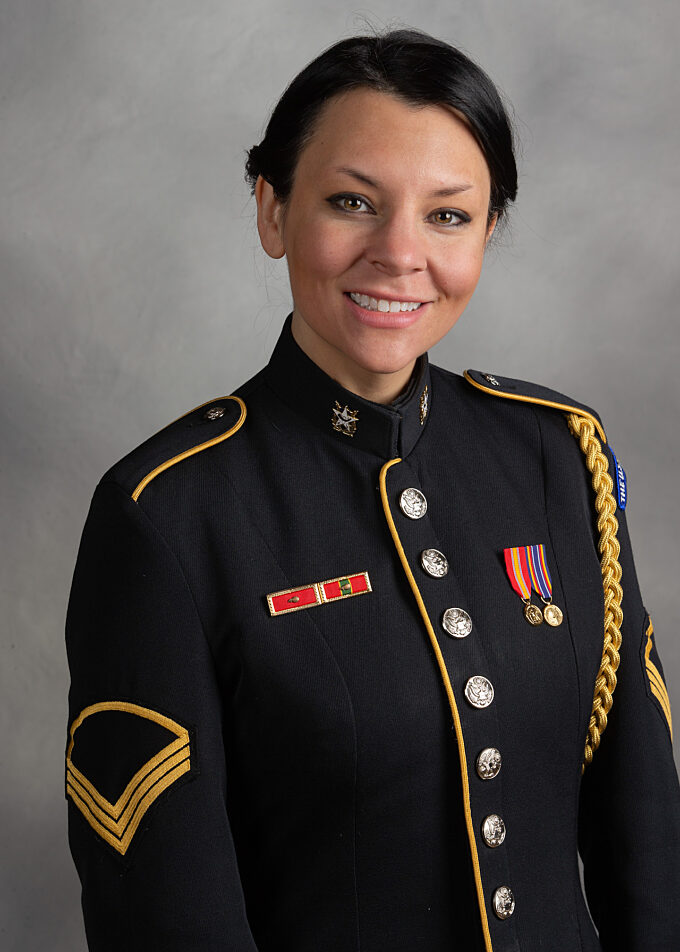 SFC Nicole Renée Bouffard earned her Master of Music in opera performance from California State University, Northridge. She was the winner of the Concerto and Aria Competition for the CSUN Symphony, was for two consecutive years a scholarship winner and guest performer for the Village Voices Chorale, the recipient of the Robert Scholarship Endowment in Voice, the Elizabeth Parham Voice Scholarship, a recipient of the Vocal Arts Faculty award and has been awarded an Outstanding Performer nomination from American Musical Theatre. As an Army soloist, she has performed for a variety of events including the annual televised PBS Memorial Day Concert; the White House Eggroll; soloist at the 2018 AUSA conference opening ceremony and sang with the Armed Forces Chorus for George H.W. Bush's Memorial Service with notable guests such as Presidents Barack Obama, Bill Clinton, Donald Trump and George W. Bush. Bouffard has also performed countless anthems and solos in support of the Military District of Washington. Besides working as a professional soloist for choirs and other ensembles, Bouffard has played countless opera roles throughout northern and southern California as well as overseas, for such companies as The Palisades Symphony, Tuscia Operafestival in Viterbo, Italy, West Valley Light Opera, The Verdi Chorus, Gilbert and Sullivan Society of San Jose and California State University Northridge. Some of her opera credits include: the title role of Lucia in Gaetano Donizetti's Lucia di Lammermoor, Elvira in Vincenzo Bellini's I puritani, Adina in Gaetano Donizetti's L'elisir d'Amore, Susanna in Mozart's Le Nozze di Figaro, Musetta in Giacomo Puccini's La Boheme, Adele in Johann Strauss II's Die Fledermaus, Despina in Mozart's Cosi Fan Tutte and many more. Some of her musical theatre credits include; Rapunzel in Into the Woods, Grace in Annie Warbucks, Bebe in A Chorus Line, The Specialist in The Who’s Tommy and Yum Yum/Mabel in the Gilbert and Sullivan review, “Now Give Three Cheers!”. Bouffard was also the Producer and General Director of Los Angeles Based opera company Orphée Arts which staged a full opera production, with full orchestra, once a year. She has served as a professional church soloist and section leader for over a decade and is well-versed in sacred repertoire.