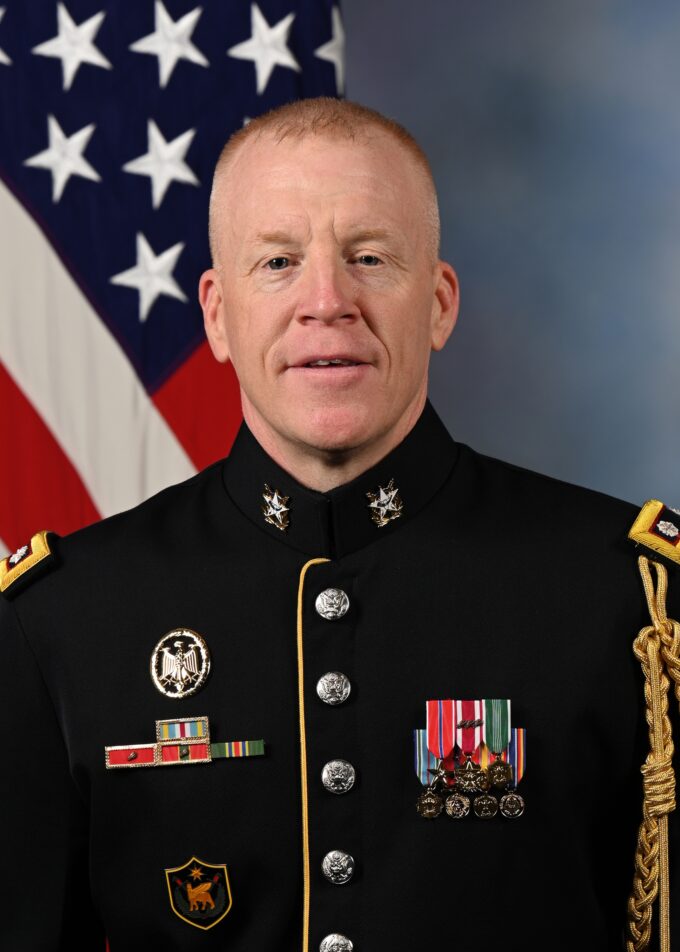 A native of Marshall, Missouri, Lieutenant Colonel Bartel began his military service in 1996 with the United States Marine Corps, serving for six years as a trumpet instrumentalist with the Quantico Marine Corps Band in Quantico, VA. He holds a Bachelor of Music Education degree from Central Methodist University and a Master of Music degree in Wind Band Conducting from the University of Missouri, and served for four years as the Director of Bands at Elsberry Public Schools near St. Louis, MO.

Prior to this assignment, Lieutenant Colonel Bartel was the Commander of the United States Army Europe and Africa Band and Chorus in Germany for four years. During this time he was responsible for 700 events across 45 countries, strengthening relationships and connections over two continents, and building partnerships with 26 allied and partner militaries. He led the Band and Chorus as it performed for the 75th and 78th anniversaries of D-Day in Normandy, France, culminating with musical support for the commemoration at Normandy-American Cemetery, hosted by the Presidents of the United States and France.

Lieutenant Colonel Bartel attended Officer Candidate School at Fort Benning, Georgia, receiving his commission as a Distinguished Military Graduate in 2005. He was the honor graduate and recipient of the President Benjamin Harrison Medal at the Adjutant General Officer Basic Course at Fort Jackson, South Carolina, and is a graduate of Captain’s Career Course, Army School of Music and Command and General Staff College, Fort Leavenworth, KS.

During his first assignment with The United States Army Band “Pershing’s Own” he served as the Director of The U.S. Army Ceremonial Band and The U.S. Army Herald Trumpets. He has led performances for five U.S. presidents, heads of state and international civilian and military leaders. He conducted performances for the 57th Presidential Inauguration, as well as multiple ceremonies and events at The White House, U.S. Capitol, Pentagon, Arlington National Cemetery, and throughout the National Capital Region. He has performed in numerous televised events such as our nation’s “National Memorial Day Concert” and “A Capitol Fourth” concerts with the National Symphony Orchestra, the American Composer John Williams 80th Birthday celebration with the Boston Pops at Tanglewood, and annual holiday broadcasts of “Christmas in Washington.” He has conducted alongside John Williams and Keith Lockhart, and has appeared on national and international media broadcasts across Europe.

His wife of 25 years is Regina, a Personal Trainer and Fitness coach, and they have two sons, Kody, 25, and Ethan, 22.