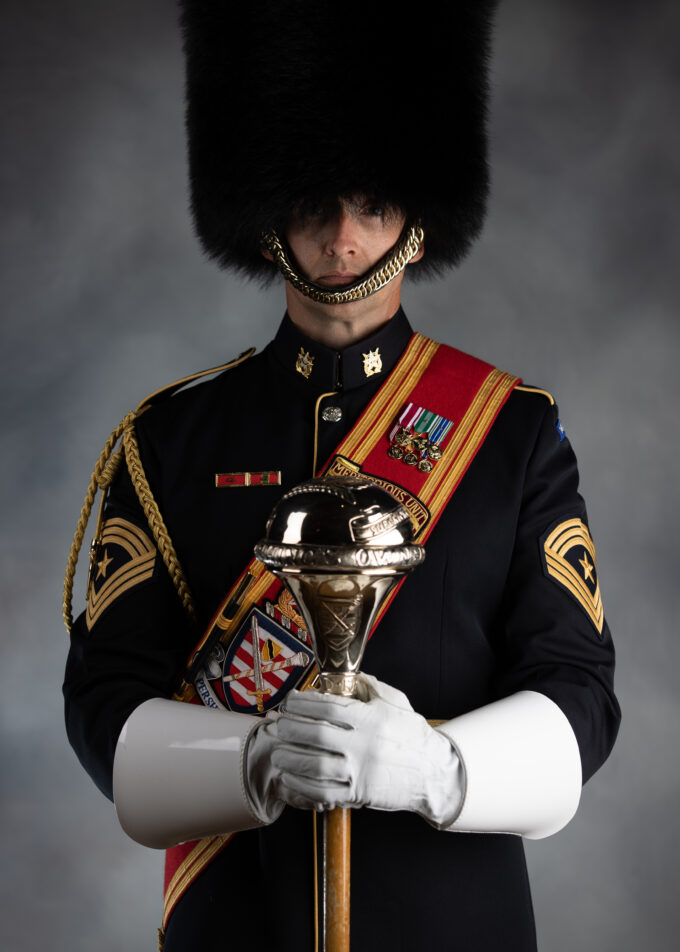 SGM Rob Moore joined The US Army Band “Pershing’s Own” in 2003 as a section percussionist serving in The Ceremonial Band Element. Initially his duties included performing for Military Full Honor Funerals at Arlington National Cemetery as well as providing musical support for ceremonies at the White House, Pentagon, and throughout the Washington D.C. region. In 2006, Moore was selected as an associate Drum Major and began serving as an enlisted leader for Military Full Honor Funerals in Arlington Cemetery. Since then he has served in expanding Drum Major duties culminating as Unit Head Drum Major in 2019. SGM Moore now serves exclusively in this role, leading ceremonial missions throughout the DC area. Outside his Army Band commitments, Moore is a freelance percussionist in the Washington, D.C., area. He has also performed with the world renowned Brass Band of Battle Creek and the Baltimore Symphony.

Moore graduated from the University of North Texas in 2003 with a Master of Music degree in Percussion Performance. While at North Texas, he enjoyed performing opportunities with the Wind Symphony and percussion ensemble and recording opportunities with musicians such as Keiko Abe, Christopher Deane, and Mark Ford. Moore also performed and toured with the UNT steel band and is a founding member of the Bain Percussion Group. While at UNT, Moore minored in wind ensemble conducting, studying with Eugene Corporon and Dennis Fisher. Moore also holds a BA in Music Education from Michigan State University where he studied percussion with Alison Shaw. Moore was an active marching percussionist at MSU, eventually serving as an assistant drum line instructor and arranger with the Spartan Marching Band and indoor drum line program.

In 2000 and 2001 Moore served as a percussion instructor for the world champion Cavaliers Drum and Bugle Corps and performed with the Cavaliers front ensemble from 1996-1998. In 1999, Moore attended the Aspen Music Festival as a Zildjian scholar where he studied percussion with Doug Howard and Tom Stubbs.