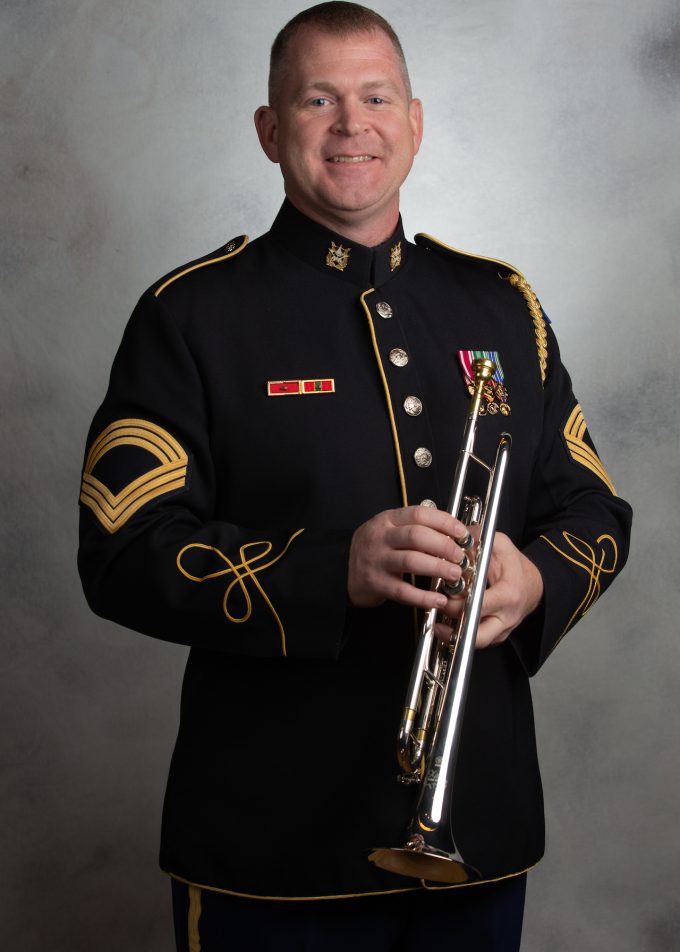 SGM Troy McKay grew up in Richmond, Missouri. In 1991 he earned a position in the John Phillip Sousa National High School Honors Band, where he performed for one week in Washington, D.C. with The United States Marine Band “President’s Own.” It was this experience that inspired him to serve his country through music.

In 1997 he earned a bachelor’s degree in music education at Illinois State University, studying trumpet with Dr. Amy Gilreath, and in 1998 he earned a master’s degree in trumpet performance as part of the last studio of Vincent Cichowicz.

McKay began his military career in 1998 as a bugler with the Old Guard Fife and Drum Corps, and he has played trumpet with The U.S. Army Band “Pershing’s Own” since joining the Ceremonial Band in 2001. In 2003, McKay joined the Concert Band, where he continues to serve as a trumpet player and the Senior Producer.

Prior to joining the Army, McKay performed throughout the United States, Europe, and Russia, most notably with the New Sigmund Romberg Orchestra, the American Russian Youth Orchestra, and the Orchestra of the World. As a member of “Pershing’s Own”, McKay has performed with the Concert Band in China, Norway, and our nation’s most prestigious concert halls such as the Kennedy Center, Kimmel Center, and the Lincoln Center. He has been a featured soloist with the band on tour as well as in our nation’s capital.

As an active conductor and educator, McKay has taught at Washington Bible College, and he currently serves as the Music Director for First Baptist Church of Waldorf, where he conducts both choir and orchestra. McKay resides in LaPlata, MD with his wife Lucile and their four sons.