Leader and Commander | from Fairfax, VA

Colonel Andrew Esch is a native of Fairfax, VA, and holds a Bachelor of Music degree from Michigan State University and a Master of Arts degree in conducting from George Mason University. He began his Army career as a Quartermaster Officer serving first as a Platoon Leader and HHC Executive Officer in the 11th Transportation Battalion, Fort Story, VA, and then as a Staff Officer in the Casualty and Mortuary Affairs Operations Center during Operation Desert Storm.

Following Desert Storm, he left the Army to join The U.S. Air Force Band in Washington, D.C. as a French horn player. After three years as an instrumentalist Col. Esch returned to the U.S. Army as a commissioned band officer.

Since then, Col. Esch has served the Army across a broad spectrum of assignments most recently as 24th Commander of the US Military Academy Band at West Point, New York, the Army’s primary public engagement organization for New York City and the Northeast region. At West Point he and the band represented the Army with regular performances for FOX, NBC’s TODAY show and with internationally renowned groups such as the Mormon Tabernacle Choir.

Col. Esch and his wife have three children. 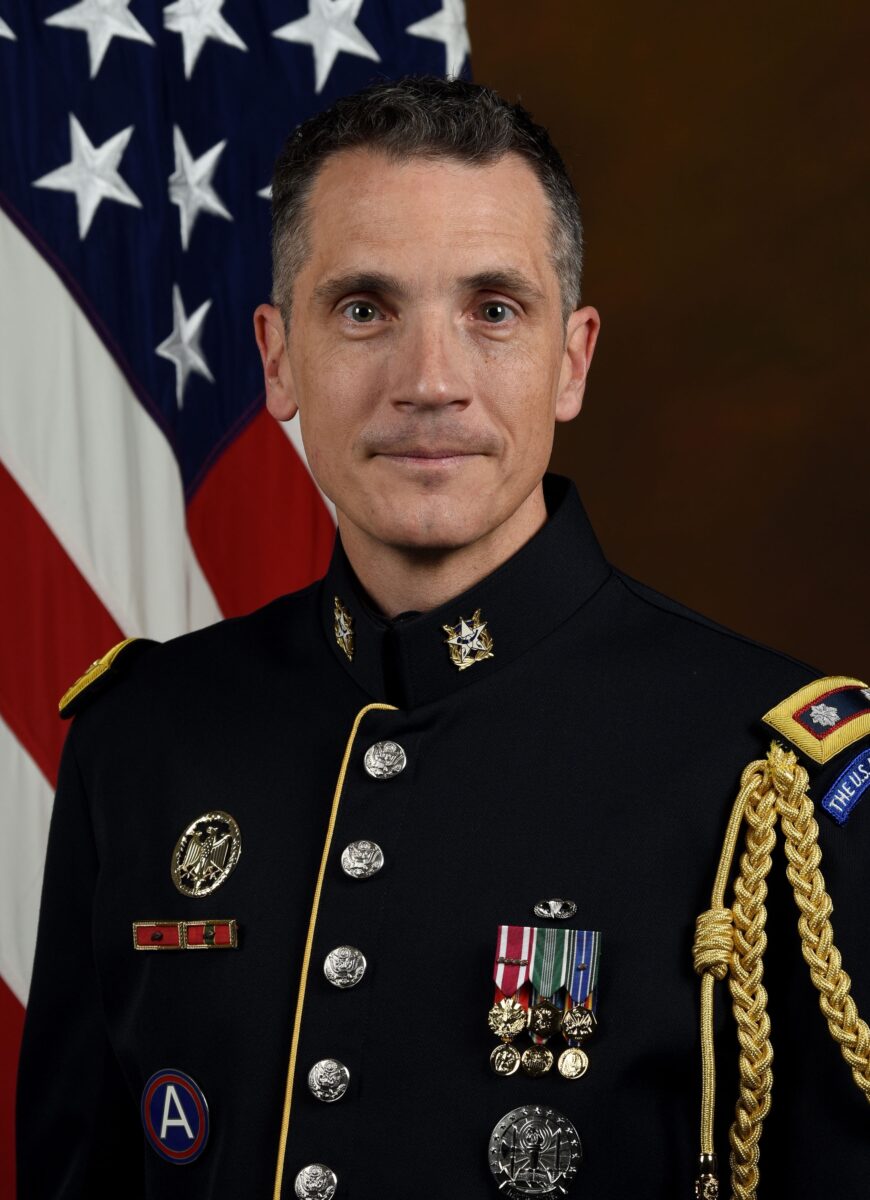 Lieutenant Colonel Daniel Toven serves the U.S. Army’s premier music organization as Deputy Commander, Associate Bandmaster, and Director of The U.S. Army Chorus. A native of Union City, PA, he holds a Bachelor of Science in Music Education and a Bachelor of Fine Arts in Trombone Performance from Indiana University of Pennsylvania, a Master of Music in Conducting from the Eastman School of Music, and a Master of Military Art and Science from the Command and General Staff College.

Prior to this assignment, LTC Toven served as the Deputy Commandant at the U.S. Army School of Music in Virginia Beach, VA. While assigned to the School of Music, he deployed to Kuwait, where he served as the Theater Music Liaison Officer for U.S. Army Central. In that role, he coordinated Army music support throughout the Middle East and leveraged those capabilities to support the U.S.’s strategic public diplomacy initiatives in the region. Other previous assignments include: Commander of The Army Ground Forces Band (Fort Bragg, NC), Army Forces Command Staff Bands Officer, Director of the U.S. Army Europe Soldiers’ Chorus (Heidelberg, Germany), and Director of the U.S. Army Soldiers’ Chorus (Fort Meade, MD).

Before joining the Army he held a variety of professional music positions throughout the northeastern United States including founder, music director, and conductor of the Plum Creek Chamber Orchestra, and assistant conductor of The Mendelssohn Choir of Pittsburgh, where he worked with Grammy Award-winning mentor, the late Robert Page. He has also prepared choruses for the Boston Pops Holiday Pops under the direction of Keith Lockhart, and for performances with the Pittsburgh Symphony Pops Orchestra under the direction of Marvin Hamlisch. In addition to teaching high school in the Pittsburgh, PA and Washington D.C. areas, LTC Toven spent the fall of 2001 as Director of Choruses for Colgate University. He continues to be in demand as a clinician and guest conductor and has conducted numerous County, District, Region, and All-State band and chorus festivals in Pennsylvania, Virginia and North Carolina.

LTC Toven has continued his professional development by attending the prestigious Pierre Monteux School for Orchestra Conductors as well as numerous choral and orchestral conducting workshops. As a trombonist, he has recorded with the Keystone Winds and performed with the Johnstown Symphony Orchestra and the St. Vincent Camerata Brass. As a vocalist, he has sung with numerous professional ensembles in the Pittsburgh, PA and Washington, D.C. areas including the Washington National Cathedral Choir of Men and Boys, and can be heard on the Cantaloupe Music recording of Steve Reich’s The Desert Music.

His husband (also an Army Officer) is an emergency nurse practitioner and has served as commander of the Headquarters and Headquarters Detachment, 18th Field Hospital, U.S. Army Reserve. 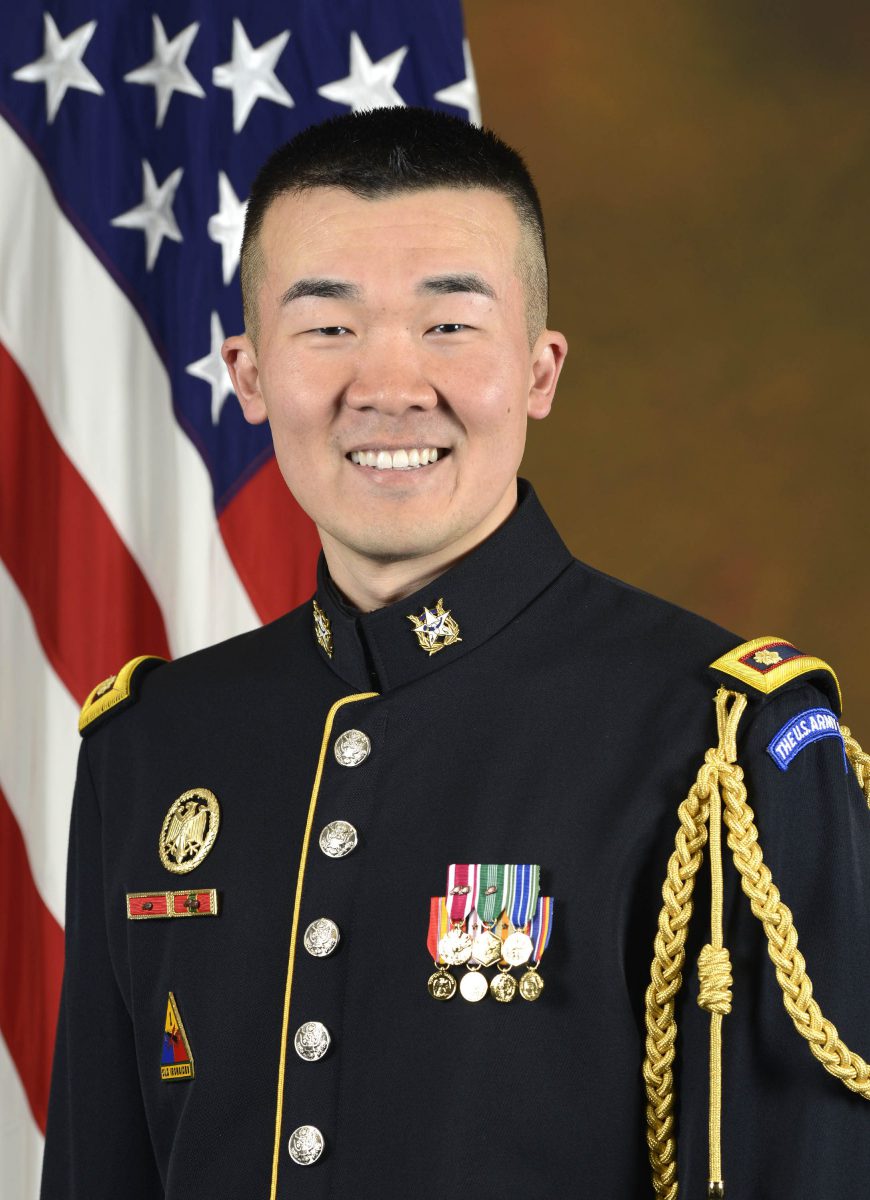 Major Dae Kim serves as an Associate Conductor with The U.S. Army Band “Pershing’s Own” in Washington, DC. A native of Philadelphia, PA, MAJ Kim is a graduate of Temple University, from which he holds a Bachelor and Master of Arts in Music, having studied conducting with Luis Biava, Arthur Chodoroff, and Timothy Oliver.

An accomplished clarinetist, MAJ Kim has performed under many noted conductors, including Christoph Eschenbach, Wolfgang Sawallisch, and Leonard Slatkin. Solo and festival appearances include the Academy of Music, Aspen Music Festival, and the National Orchestral Institute. His principal teachers were Samuel Caviezel and Ronald Reuben. 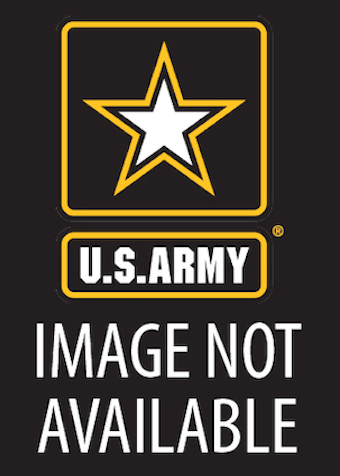 Captain Richard Viglucci serves as an Associate Conductor with The U.S. Army Band “Pershing’s Own” in Washington, DC. A native of Albany, NY, he holds a Bachelor of Music in Clarinet Performance from SUNY Potsdam’s Crane School of Music, a Master of Music in Clarinet Performance from Northwestern University, a Master of Music in Conducting from Northern Arizona University, and a Doctorate of Musical Arts in Clarinet Performance from the University of Nebraska-Lincoln. CPT Viglucci’s DMA document, A Comparative Study on Nineteenth-Century Works for Clarinet Based on Motives from the Operas by Gaetano Donizetti, studied the historical background of nineteenth-century operatic fantasy for clarinet, its importance and niche in the culture of nineteenth-century Italy, and its uses by clarinet virtuosi from that period. 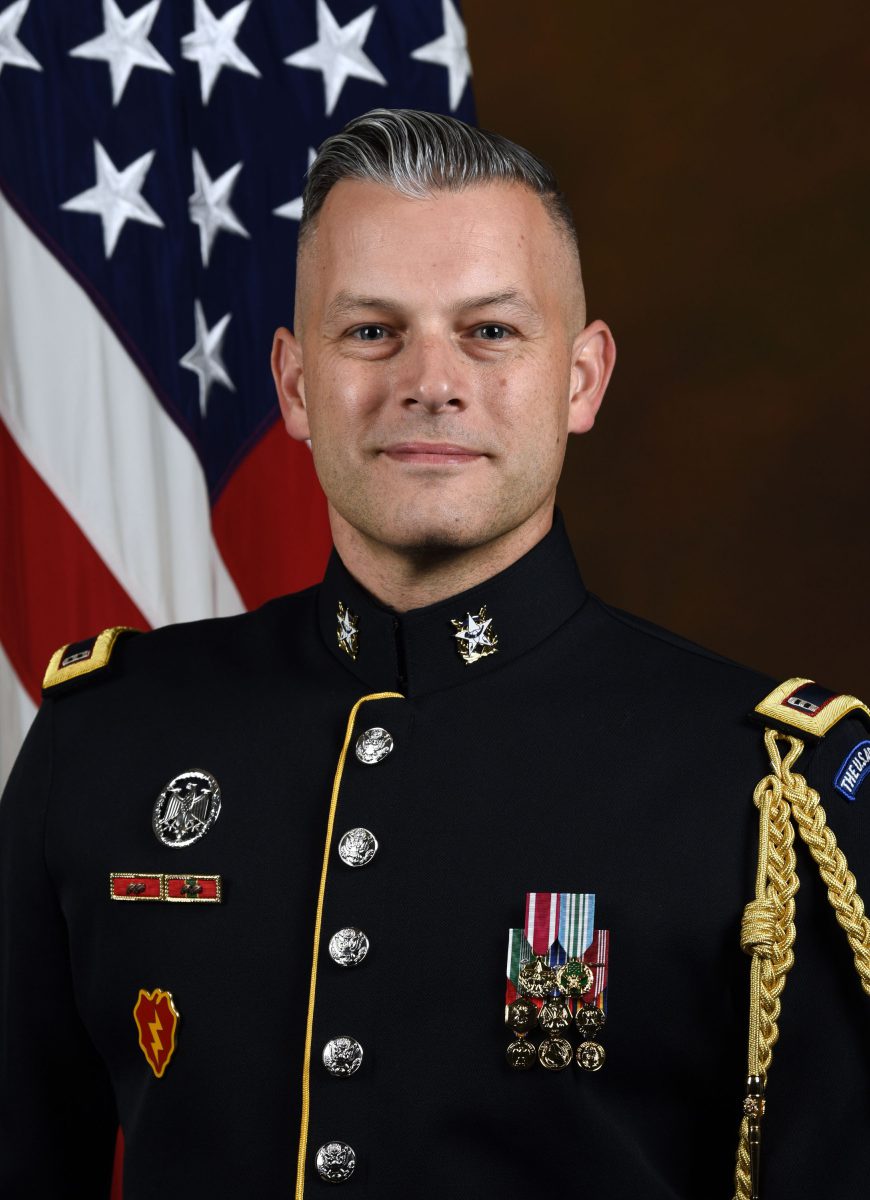 Chief Warrant Officer 2 James H. Landrum is a native of Marietta, GA. After graduating from Pope High School, Chief Landrum attended the University of Kentucky (Go Cats!) and earned a Bachelor’s Degree in Music Performance as a percussionist. He later earned a Master’s in Business Administration from Liberty University.

CW2 Landrum entered the Army in 2004 as an enlisted percussionist. After attending basic training and Army Musician AIT, his first duty assignment was with the 25th Infantry Division Band at Schofield Barracks, HI, with whom he deployed to Iraq for 13 months. Subsequent enlisted assignments include The U.S. Army Training and Doctrine Command Band, Fort Monroe, VA; the SHAPE International Band, Casteau Belgium; and the 101st Airborne Division Band, Fort Campbell, KY.

CW2 Landrum became a Warrant Officer Bandmaster in 2015. His assignments as a Warrant Officer have been as a Doctrine Writer and Training Developer with the U.S. Army School of Music’s Directorate of Training and Doctrine; as the Commander of the 392D Army Band at Fort Lee, VA; and as Associate Bandmaster of the United States Army Band “Pershing’s Own.”

CW2 Landrum is married and has four children. 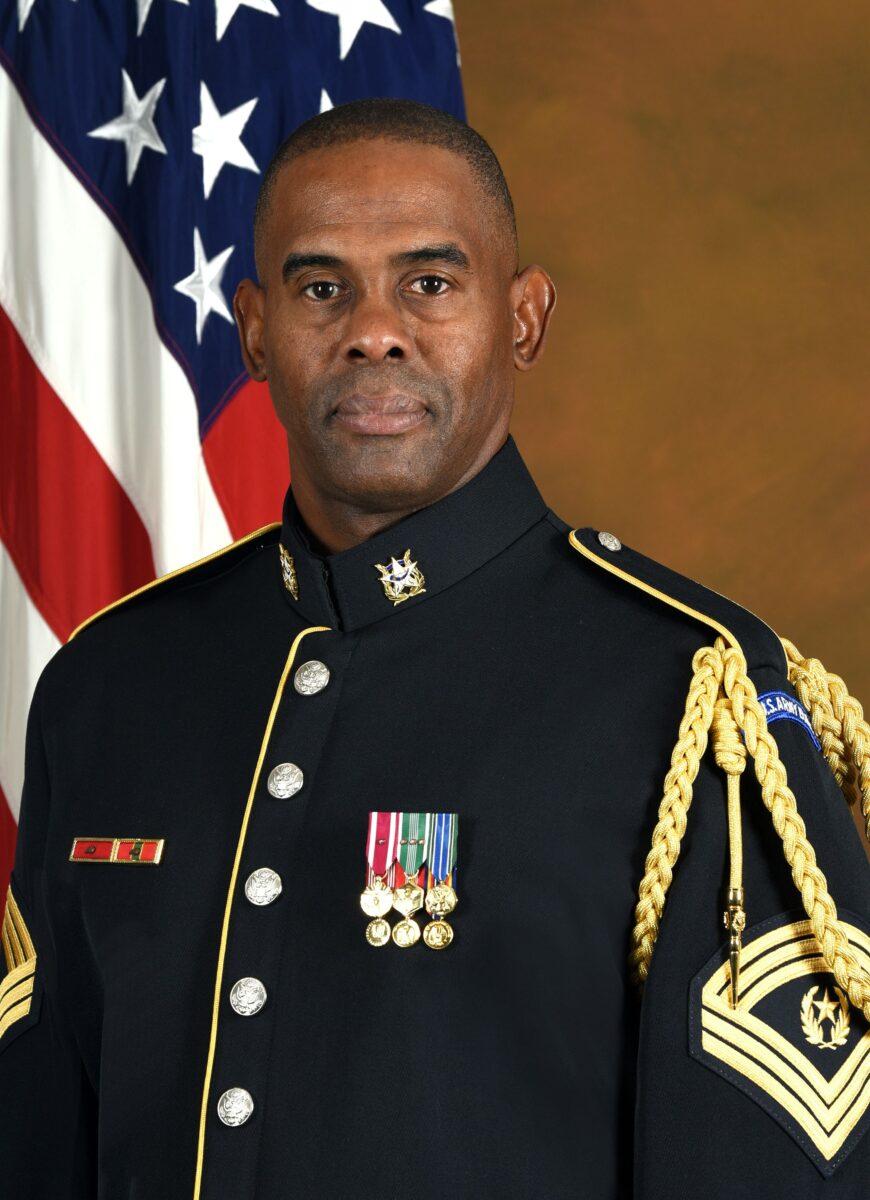 CSM Ayers earned a Bachelor of Music degree from Duquesne University in 1996 and a Master of Music degree from the same institution in 1998. While at Duquesne, he studied with Robert Hamrick and Murray Crewe. He has performed professionally with the Pittsburgh Symphony Orchestra and the Wheeling Symphony prior to joining The U.S. Army Band. Significant missions with the Army Band include the opening ceremonies for the Winter Olympic Games in Salt Lake City, five Presidential Inaugurations, Recognition of the 50th Anniversary of the Korean War, and the Rededication of the St. Lawrence Seaway to name just a few.