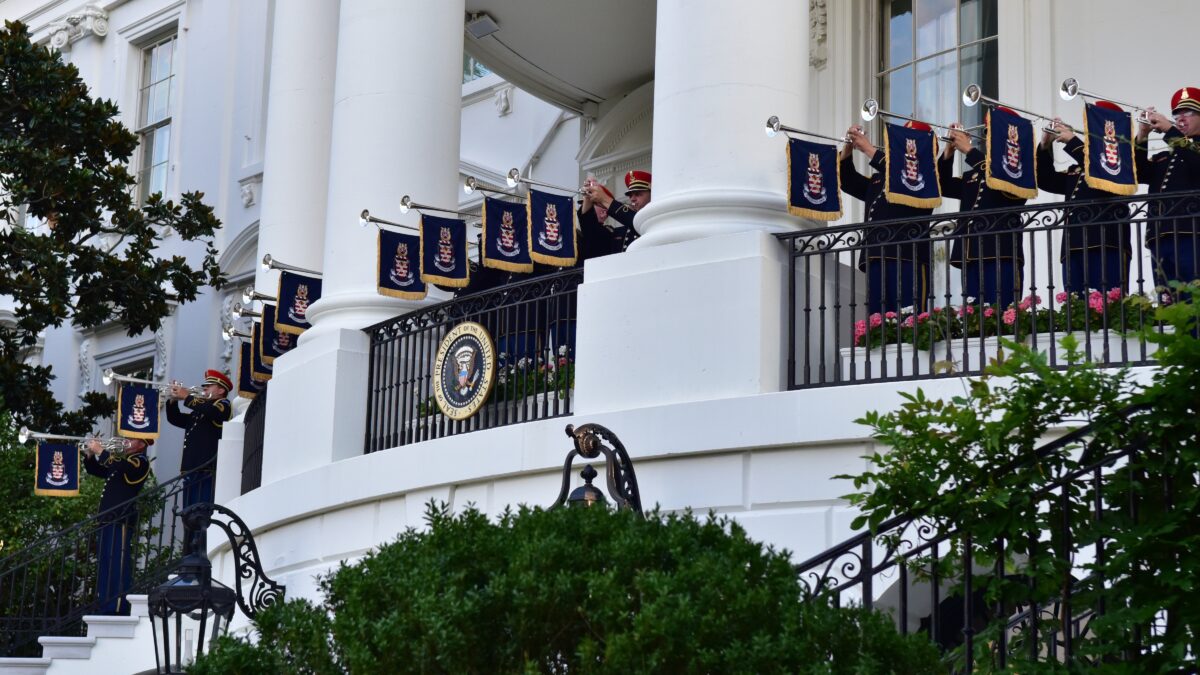 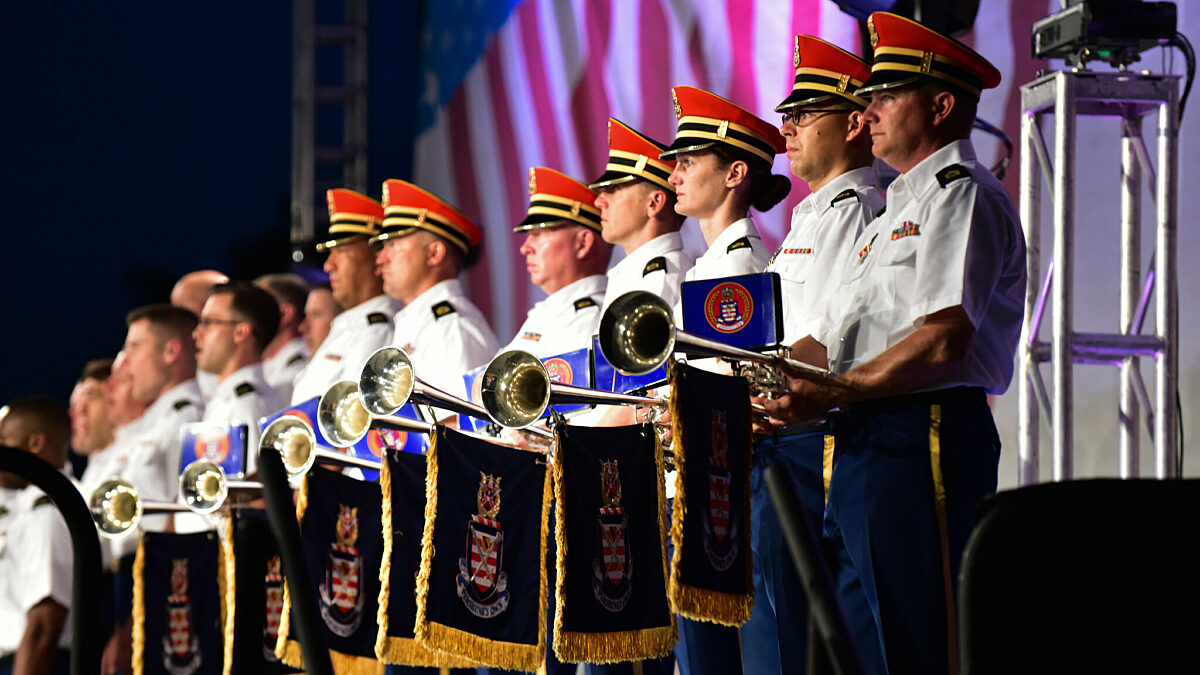 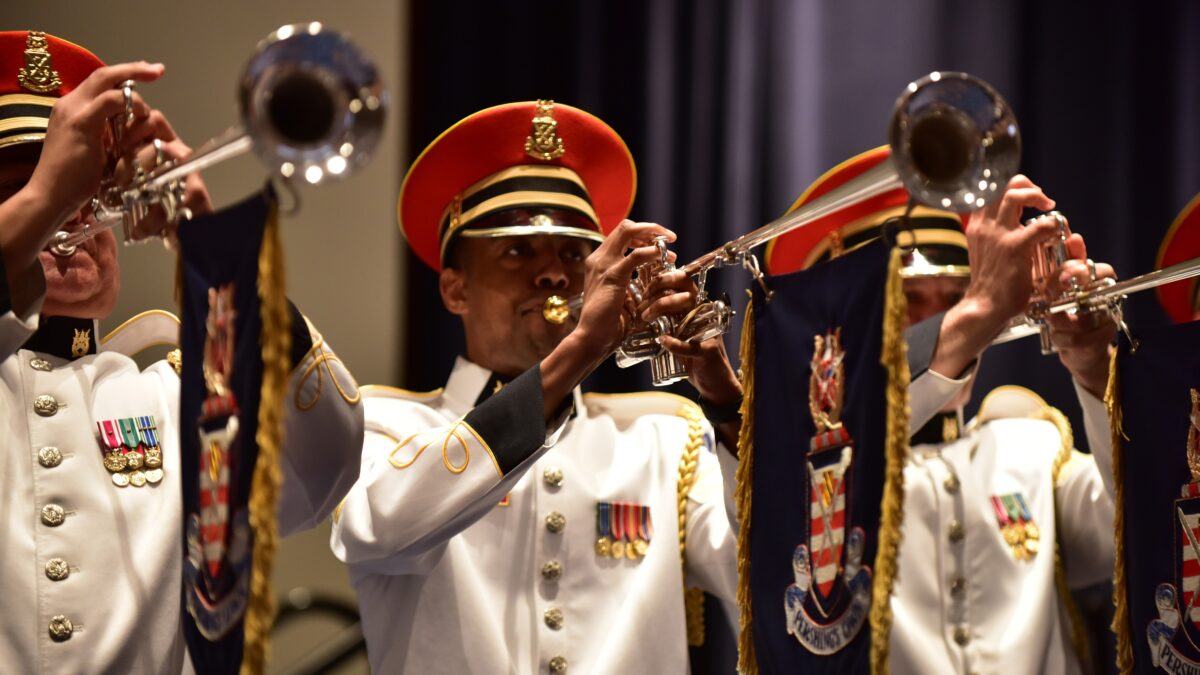 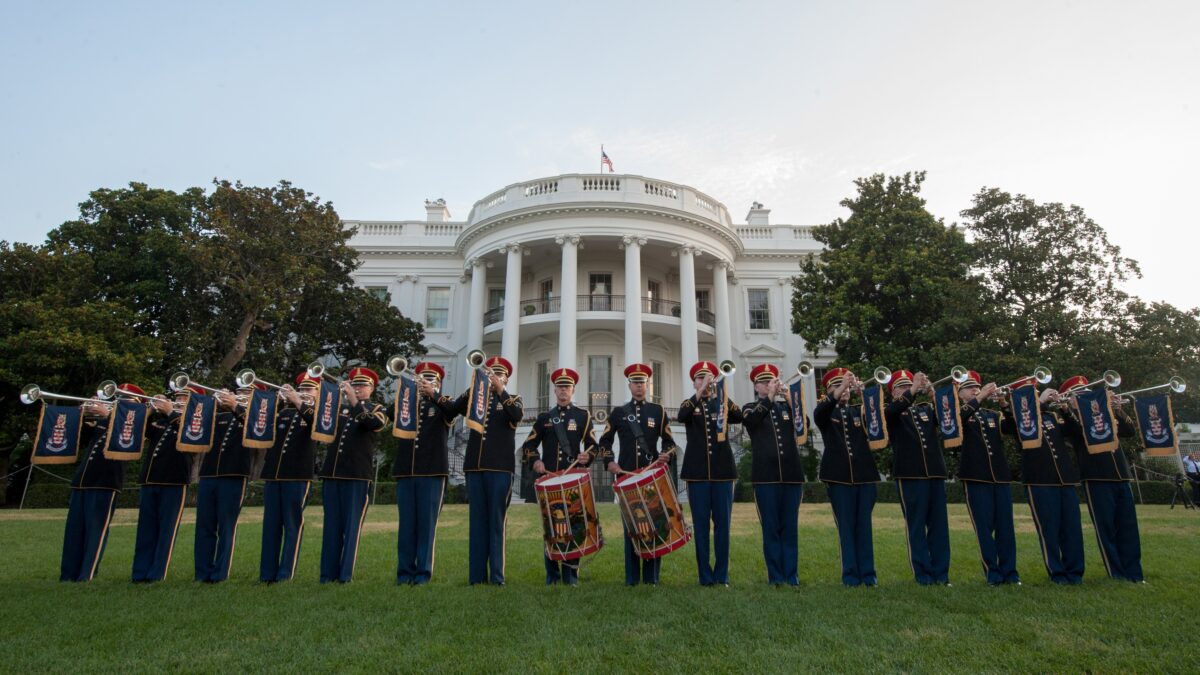 A performing element of The United States Army Band “Pershing’s Own,” the ensemble has performed for countless events of national and international significance. Officially founded in 1959, The U.S. Army Herald Trumpets were formed to add splendor to official military ceremonies. Patterned after traditional British fanfare trumpet ensembles, the group now serves as the official fanfare ensemble to the President of the United States, and can often be seen lining the South Portico of the White House, as the President welcomes foreign ambassadors, royalty, and visiting heads of state and has been heard and prominently seen at every presidential inauguration since President John F. Kennedy's in 1961.

The group’s first official performance welcomed Her Royal Highness Queen Elizabeth II to Chicago for the opening of the St. Lawrence Seaway and in the ensuing years the Heralds Trumpets have performed for an illustrious array of presidents, prime ministers and royalty at the White House and abroad. Notable events include 16 presidential inaugurals, the G8 Economic Summits in 1984, 1990, and 2004, the 50th Anniversary of the United Nations, the official White House arrival ceremonies of Pope Benedict XVI in 2008 and Pope Francis in 2015, and the 2013 opening ceremony of the George W. Bush Presidential Library which was attended by all five living Presidents of the United States. In September of 2016 the Herald Trumpets were proud to take part in the historic opening ceremony of the Smithsonian’s National Museum for African American History and Culture.

In addition to official military duties, the Herald Trumpets have performed in the opening ceremonies for numerous Winter and Summer Olympic Games, Super Bowl XXXIX, the 2015 NCAA Men’s Division I Basketball Championship, and the 2016 Invictus Games hosted by His Royal Highness Prince Harry of Wales. Also, the ensemble has performed at nationally and internationally televised events such as the Kennedy Center Honors, the relighting of the Statue of Liberty, and the annual holiday celebrations “A Capitol Fourth,” “Christmas in Washington,” and “The National Memorial Day Concert.”

The Herald Trumpets originated in 1948 when Gilbert Mitchell (associate principal cornet) formed a small brass ensemble from the ranks of the The U.S. Army Band. It was his desire to create an additional performance outlet for himself and his fellow brass players. This group performed on occasion for the next decade but was never firmly established as a distinct performing ensemble within the Army Band. Performance opportunities were limited and the nature of the group did not lend itself well to the band’s military mission.

In the late 1950’s, William Bramwell Smith, Jr., former featured cornetist with the United States Marine Band and its first foreign-born member, joined the Army Band as the associate principal cornet under principal cornetist Mitchell. Together they decided to rekindle Mitchell’s aspirations of incorporating a distinct brass ensemble within The Army Band. Mitchell and Smith convinced their commander, Lieutenant Colonel Hugh Curry, of the value of such a group. Mitchell reinforced the idea that the Herald Trumpets were intended to “add to the splendor of military ceremonies”. As a result, The United States Army Herald Trumpets became a reality. The group was patterned after British coronation style trumpet ensembles that are rich with ceremonial tradition and consists of instrumentation that covers the full range of musical voices. This enabled the Heralds to perform separately for ceremonial functions, as well as in conjunction with the full band. Most importantly, the ensemble could now contribute the Army Band’s mission of providing music for military ceremonies. In 1959, its first official performance welcomed Queen Elizabeth II to Chicago for ceremonies related to the opening of the St. Lawrence Seaway. Subsequently, in April of 1960, The U.S. Army Herald Trumpets gained official recognition in Washington when they performed at the arrival and departure ceremonies of French President Charles De Gaulle.

The ensemble is comprised of 14 trumpeters and two drummers. Timpani and cymbals may be added for special occasions or performances. Four different types of trumpets combine to create a family encompassing the full range of musical voices. They include the E-flat soprano, B-flat mezzo-soprano or melody, B-flat tenor, and Bb or G bass trumpets. Trumpet players play the Eb soprano and Bb melody trumpets while the tenor trumpets are played by trombone players. Euphonium players play the bass trumpets.

Music for the ensemble is scored for seven parts, plus percussion. Traditionally, each part is doubled, creating a double family. The seven parts consist of Eb soprano, 1st Bb melody, 2nd Bb melody, 3rd Bb melody, 1st C tenor, 2nd C tenor and G (or Bb) bass. The tenor parts are written in C although the tenor trumpets are pitched in Bb. As a group, the Herald Trumpets produce a more brilliant, strident sound than traditional trumpets.

In the late 1950’s, there were very few, if any, American made herald trumpets. The U.S. Army Herald Trumpets’ original set of instruments was obtained from Boosey and Hawkes, Ltd., of London, England. Instruments manufactured by B & H (Besson) were used exclusively by the ensemble until 1992, when Roy Lawler of Florida was contracted to design and manufacture a custom set of E-flat soprano and B-flat melody trumpets. The group currently uses a complete custom set of E-flat soprano, B-flat melody, B-flat tenor and G bass instruments made by Kanstul Musical Instruments of California.

In addition to the family of trumpets, there are two rope drums that provide the rolls used for timing the placement of fanfares. The original rope drums were hand crafted in the 1950’s by the famous New York drum maker, Gus Moeller. Known for its dark tone quality and strength, Moeller used a single piece of Ash wood to create the drum shells. The exceptional volume created by the Herald trumpets demanded the projection that only a sizeable drum could provide. The playing head is 17 inches in diameter while the shell has a depth of 19 inches. A single fifty foot piece of white polyester rope along with 10 leather “ears” provide a variable amount of tension to the drum heads.

The heads were originally made of calfskin, but in recent years heads made from a modified Kevlar material created by a Swiss company have been used. Known for its durability, the Kevlar material is less prone to wear and allows for greater consistency in tuning.

The hand painted scene that adorns each drum was an original work by Gus Moeller, which he entitled, “The Grand Republic.” After his death, the scene became commonly referred to as “The Moeller Eagle”.

The original drums are perhaps best known for their use by “Pershing’s Own” in the funeral procession of President John F. Kennedy. Because of their age and priceless historical value, two of the drums have been retired and put on permanent display; one in the lobby of Brucker Hall: the home of The United States Army Band, and the other at the Smithsonian Institution in Washington DC.

Since 2003, Jim Ellis from the Cooperman Drum Company has hand made the next generation of Herald drums and has maintained the same quality, technical specifications, and attention to detail as the original Moeller instruments. The Grand Republic remains unchanged and meticulously hand painted specifically for The United States Army Herald Trumpets.

The brightly colored banners or tabards that hang from the bell of each instrument serve to enhance the visual effect of the ensemble. The concept of the tabard is drawn from the traditions of similar British trumpet ensembles. Since its founding The Army Herald Trumpets has used three different tabard designs. The original tabard depicted the U.S. Army Eagle emblem on a dark blue background with yellow fringe border. The succeeding tabard displayed elements of the shield in The U.S. Army Band’s coat of arms: Crossed mace and sword and Rhineland Campaign Shield on a red and white striped background with yellow fringe border. The third and current tabard displays the full coat of arms of The U.S. Army Band. This tabard was produced in two sets; one set with a blue background and the other with a white background; both with yellow fringe border.

The Tabards of The U.S. Army Herald Trumpets