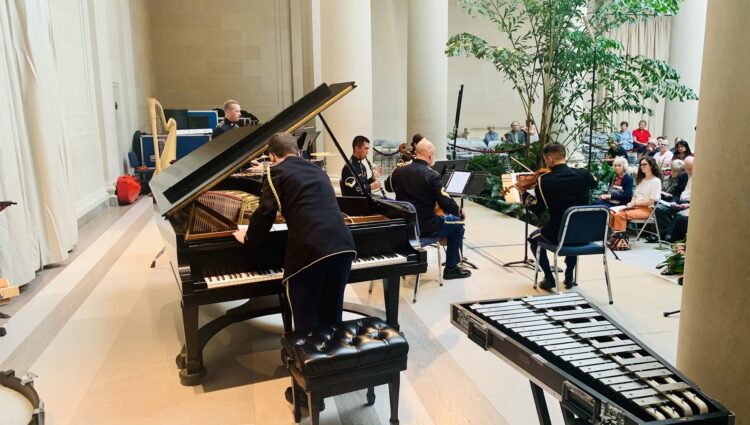 This is a Ticketed Event

This performance is free and open to the public, but tickets are required.

The U.S. Army Band "Pershing's Own" is not only endowed with a number of world-class large ensembles, such as a concert band, string orchestra, chorus, jazz big band, and more, but is able to program in the space between with its robust chamber music series, deploying smaller ensembles with one player on a part performing challenging repertoire at the cutting edge. Pershing's Own Chamber Players have performed in various configurations at the Kennedy Center's Millennium Stage, the National Gallery of Art, and various venues around the Maryland, Virginia, and Washington, DC arts community.

Each Army Band officer will conduct his/her favorite piece for concert band to include standards such as the Elegy for a Young American, orchestral transcriptions, and recently composed selections by Omar Thomas and Jay Kennedy.

The U.S. Army Blues performs as part of Shepherd University's annual Jazz Festival. No tickets; free and open to the public.

Day 1 of 4 of the annual American Trombone Workshop. See website for details.

Day 2 of 4 of the annual American Trombone Workshop. See website for details.

Day 3 of 4 of the annual American Trombone Workshop. See website for details.

Day 4 of 4 of the annual American Trombone Workshop. See website for details.

High School finalists perform recital-style to place in the 2023 Army Orchestra Young Artist Competition. One will earn the honor of performing as soloist with the Army Orchestra at a concert in May.

The U.S. Army Chorus performs with the NOVA Community Chorus on its Spring Concert entitled Reconciliation.