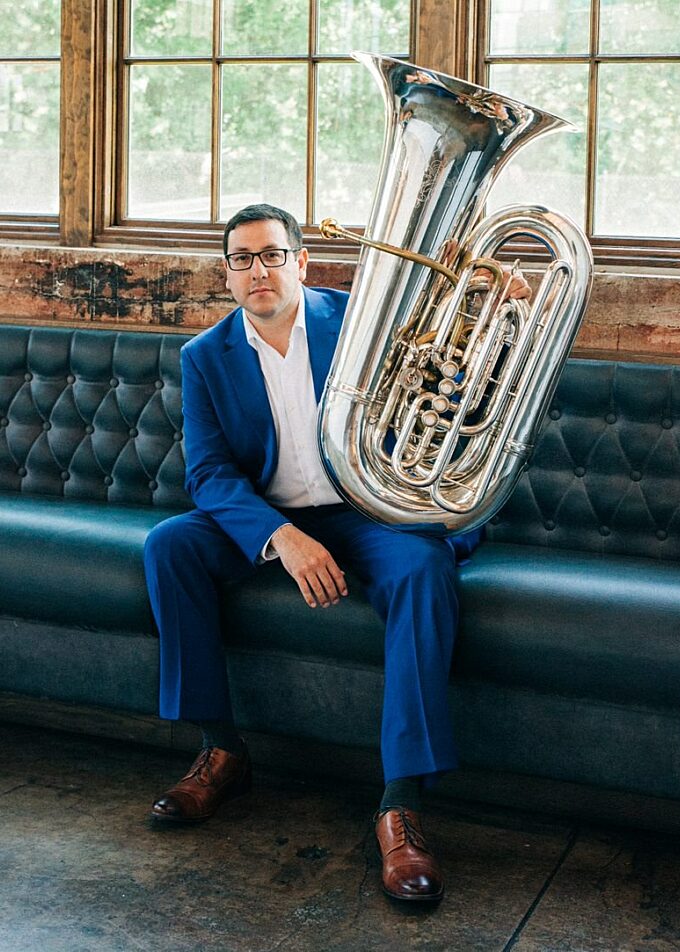 Justin Benavidez is the professor of tuba and euphonium at the Florida State University College of Music and performs as principal tuba of the Tallahassee Symphony Orchestra. In the summer, he is on faculty at the Round Top Music Festival in Texas.

With his playing noted for its “tremendous virtuosity and stylistic versatility,” Benavidez has performed in venues throughout North America, Europe, and Asia. He has been featured numerous times on APM’s Performance Today radio program. His debut solo album, Emblems, won Silver Medals in the Classical Album and Instrumental Solo Album categories of the Global Music Awards. The International Tuba Euphonium Association Journal described it as “an impressive and highly entertaining record” on which Benavidez “shreds with enthusiasm, exuberance, and precision.”

Benavidez has been a prizewinner of multiple international solo competitions. He is the only tubist to have been awarded both the New Horizons Fellowship and the Orchestral Fellowship at the Aspen Music Festival where he was a student for six summers, held the principal tuba chair in the festival orchestra, and was the winner of the prestigious Aspen Music Festival concerto competition. Benavidez was the distinguished recipient of the Horace H. Rackham Merit Fellowship for doctoral studies at the University of Michigan and was presented with the UM School of Music, Theatre & Dance Paul Boylan Alumni Award for outstanding accomplishments and significant contributions in the field of music.

As one of today’s leading educators, Benavidez is frequently invited to present master classes and perform as a guest recitalist at preeminent universities, workshops, and conferences. Notable invitations have included the Eastman School of Music, Indiana University, the Kunitachi College of Music in Tokyo, the Bern University of the Arts, the Lyon Conservatory of Music, the Paris Conservatory of Music, the United States Army Band Tuba Euphonium Workshop, and multiple International Tuba Euphonium Conferences.

Benavidez’s students have distinguished themselves through numerous accomplishments and awards, including prizes at international competitions, fellowships to summer music festivals, assistantships for graduate study, performances with professional ensembles, and teaching positions at secondary and collegiate institutions.